Today’s Tribe Sports Report written by Dalton Bishop. You may contact Dalton at his email dalton_bishop@olemiss.k12.in.us.

Wednesday’s Boys Tennis Senior Night was postponed due to inclement weather. The will now play tomorrow Friday September 24th at 4:30.

Volleyball fell twice this week once to Delta and once to county opponent Oak Hill. Last night the Lady Indians picked a win with no problem defeating Elwood 3-0. The Lady Indians returns to action next Tuesday September 28th at 6pm.

Boys Soccer has already had an historic season, on Monday the boys soccer team defeated Marion for the first time in program history. The Indians beat the Giants 4-1 Mason Reel and Zane Scott scored two goals a piece in that victory. Last night the Indians defeated Manchester 1-0 with the lone goal coming from Mason Reel after an assist from Hayden Ulerick. The Indians return to action Saturday September 25th at home as they host Tipton at 10am.

Girls Soccer beat Marion last night convincingly 6-1. Michaela Cook and Lia Luchetti each had a hat trick scoring 3 goals. Michaela Cook and Audrey Spencer each had 3 assist. Savannah Herrera had 3 HUGE saves in goal. The Lady Indians are now 9-3 on the season and they will return to action next Monday September 27 as they host Eastbrook at 6pm.

Football will be at home tomorrow night as they host Frankton at 7pm. If you can’t make it you can watch live on MCSC Athletics Youtube.

Tonight, It’s a Central Indiana Conference and a county showdown in Mier as the 1-2 Indians battle the 3-1 Oak Hill Golden Eagles.

Volleyball:
Coach Havens and her Lady Indians took down Marion three sets to zero last night. The Tribe moves to 12-4 on the season.

Girls Golf:
Coach Dakin and his Lady Indians will compete in sectional #12 this weekend at Arbor Trace Golf Course starting at 9am.

Girls Soccer:
The Lady Indians will be in action this weekend as they will travel to Blackford for a CIC battle at noon.

Boys Tennis:
Coach Bruce Fleming and Indians are in action this weekend as they head to Homestead High School for a Invitational starting at 8pm.

Plenty of action this weekend so go out and cheer on the Indians!! 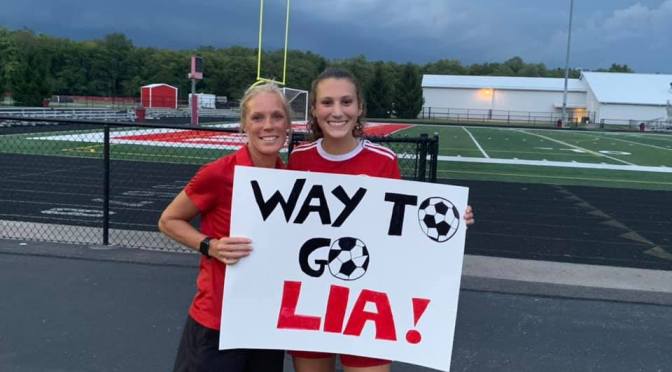 Today’s Tribe Sports Report written by Dalton Bishop. You may contact Dalton at his email dalton_bishop@olemiss.k12.in.us

It has already been a very fun and rewarding season for coach Andrea Wilson and the Lady Indian soccer team, last night the fun continued. The Lady Indians welcomed the Wapahani Lady Raiders to Fisher Field for what turned into a very competitive match. Ole Miss got knocked on their heels early in the match trailing at the halftime break 3-1. In the second half, Junior Lia Luchetti led the charge propelling the Indians to a 5-3 victory over the Lady Raiders. Savannah Herrera had two saves in goal that proved to crucial down the stretch. The scorers last night for Ole Miss were Michaela Cook with one, Audrey Spencer with one, and Lia Luchetti scored three goals last night, the third goal allowed her to surpass Kayla Webb for the all time single season scoring record. Webb previously held the record at 26, Luchetti now holds the record at 27. Luchetti ranks 4th in the state and 6th in the country among high school girls soccer players in scoring, she also is nominated for an opportunity to be the MaxPreps player of the week. A link will be posted below on how to vote for her. You may vote as many times as you’d like.

What was a rocking house inside Fredenberger Court saw what turned into one heck of a volleyball match. The Lady Indians battled hard back and forth with Alexandria taking the match to five sets where eventually the Tigers would pull away in the end for a victory. Ole Miss was able to come from behind in the first set after trailing 16-13, A perfect set from Senior Jazzy Nicholson allowed Senior Mia Catey to score a kill ultimately allowing Ole Miss to take the set 26-24. Alexandria would win the second set 25-22. After leading 9-3 in the third set Alexandria would rally to win it 25-19. The fourth set saw much of the same battling back and forth before eventually a block by Senior Megan Stanley and Junior Daniella Joesph would allow Ole Miss to win the set 25-19 and pull it to a tie at 2-2 forcing the Ole Miss student section to roar back to life. In the final set Ole Miss fell 15-8. The Lady Indians are now 11-4 on the year and will play at Marion on Thursday at 6pm. Theme for tomorrow’s match will be “USA” theme.

The final match of the regular season saw struggles for the Ole Miss Lady Indian golf team. A night for learning about themselves and a night that showed a team that doesn’t give up. Ashtynn Brubaker was a medalist by 7 strokes shooting a 51. Lily Walton shot a 67 and Layla Kikendall shot a 70. The Lady Indians open up tournament play on Saturday with the IHSAA Sectional.

#24 Mississinewa Boys Tennis is on the road tonight for another CIC Matchup against the Elwood Panthers. The match is scheduled for a 5pm start. Next Wednesday September 22nd the Indians will be at home against Frankton for Senior night the theme for that match will be a “REDOUT”

Boys Soccer was in action last night against Wapahani, No results were reported.

JV/VARSITY Football vs. Marion has been CANCELLED