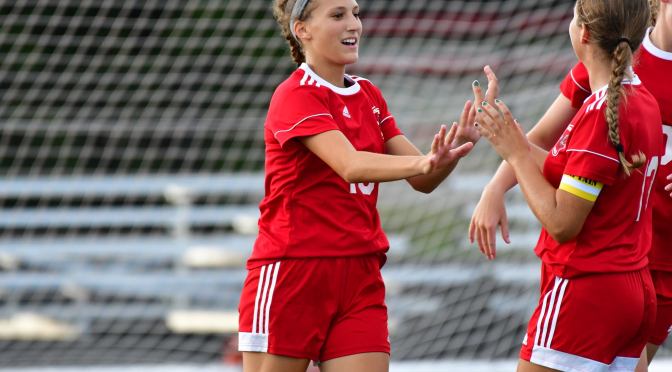 The Mississinewa Girls Golf team continues to battle night in and night out. The girls played very well last night at arbor trace golf course as the Indians took on Eastbrook and Wabash. Head coach Josh Dakin was very happy with his teams performance. “Proud of the battle and consistency from our girls” said Dakin. Ashtynn Brubaker 44 (medalist) Layla Kikendall 69 were the two scores reported. The Lady Indians are back in action next Tuesday, September 8th at 4:30pm.

Last night the Girls Soccer team put on a dominating performance as they coasted to an 11-0 victory over the Eastern Comets. Junior Lia Luchetti led the way for Ole Miss scoring 6 goals. Avery Wilson scored 2, Kendal Emmons, Michaela Cook, and Isabelle Lucas all had 1 a piece. Savannah Herrera had 2 saves in goal. The Lady Indians are 3-2 on the season and return to action against Tippecannoe Valley on Saturday.

The #22 ranked Mississinewa Boys Tennis team continues to dominate. The Indians scored a 5-0 victory on county foe Madison-Grant last night. Winners were Riley Fuqua at number one singles, Hayden Rowley, and John Oliver at number two and three singles. Ryan Scott and Ethan Sample took care of business as they’ve done all season long winning 6-0, 6-0 at the number one doubles. Kannen Smith and Garrett Spencer won number two doubles. The Indians are now 8-0 on the year and 1-0 in the CIC. The busy week for the Indians continues tonight with Blackford coming to town to entertain the Indians at 5pm.

As a reminder tonight’s Volleyball matched scheduled with Eastbrook has been postponed. Stay tuned to MCSC Athletics on Facebook and Twitter for more updates regarding rescheduling info.