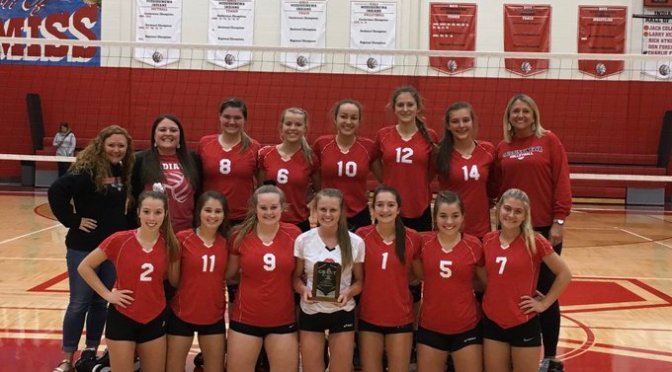 Indian News. The Tribe Sports Network is waiting on licensing to broadcast the football sectional. Once it comes through, we will share broadcasting information with the public. Thank You!

Football Sectional Pairing. Legendary coach Bob Lovell of the IHSAATV announced the 4A sectional 20 pairings yesterday and with that said the Tribe will play Delta in Game 2 at Mississinewa on October 25th.

Volleyball.  Three in a row? You have that right, The Mississinewa lady Indians volleyball team knocked down Madison Grant three games to none to clinch their third Grant 4 title in a row. No official stats were reported.

Cross Country. It was a cold and long day for head coach Ean VanWinke and his squad at the Marion sectional held at IWU. VanWinkles boys team was the first off the start line, the team finished 7th but they will send Zak Huffman, Jon Alsup and Tony Parish to the Marion regional next Saturday. On the girls side the ladies had a strong showing and they will advance as a team to next weeks Marion Regional.

Football. Mother nature got her way this past Friday as the Indians traveled to Alexandria for a CIC showdown, through the rain and cold the team was able to come up with a 65-7 win over the Tigers.