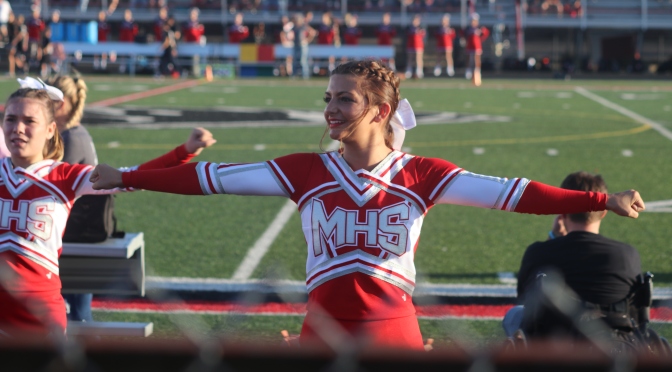 Indian News . Homecoming 2019 launches today. This year’s theme is “We are the Champions”. The week’s agenda and events can be found on the MCSCAthletics home page. Today’s dress-up theme is “A Time to Serve”. Tomorrow students will be celebrating their favorite “Holidays” attire.

MHS eSports practice for today is cancelled. Any questions can be directed to Coach Armes.

The Unified Football team competed alongside the Marion Giants on Saturday for a flag football contest. Congratulations to all athletes on a great performance and thanks to our community for the support.

MHS Football . The Indians lost the milk jug on Friday night in Upland to the Eastbrook Panthers as they fell 21-14 in what could be the deciding factor in the CIC championship. Senior Andrew Cruz rushed for two touchdowns and Junior Andre Sallade kicked in two PATs. Mississinewa faces the Argylls of Madison Grant this Friday to get back on track.

MHS Cross Country . Mississinewa competed in the Wildcat Invitational on Saturday at Indiana Wesleyan. Carli Fones finished 4th overall followed by Raegan Tippey at 13th. Fones and Tippey were the only medalists for the girls who placed 10th out of 13 teams. The boys were 8th out of 16.

MHS Volleyball . No official results were reported for the Lady Indians at the Rossville Invitational this past weekend, but unofficially Mississinewa defeated Rossville and loss to Maconaquah.

MHS Boys Tennis . The Indians served up a 5-0 win over Northeastern on Saturday. Murphy, Oliver, and Rowley all won on the Singles courts. Both duos of Scott/Fuqua and Christensen/Morrison eased past their Doubles opponents. The team is now 12-3 with Alexandria tonight in a CIC battle at Mississinewa.