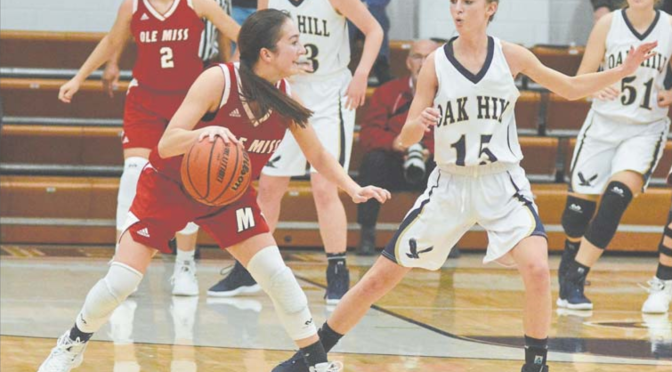 MHS Girls Basketball . The Lady Indians took on Oak Hill on the road Saturday in a CIC contest in which the Lady Eagles entered highly ranked and locked in on the defensive leaderboard. Mississinewa lost 63-23 after nearly two quarters of scoreless play. Ally Hewitt led the Lady Indians with 7 points. The junior varsity dropped their contest to Oak Hill earlier that morning.

MHS Boys Basketball . Coach James Reed picked up his first win of his career against the State Champion Oak Hill Eagles on Friday night. The Indians captured a CIC victory 69-60 forcing 25 Eagle turnovers. Colin Yoder had a stand-out performance with 15 points including some work behind the arc that turned up the energy in the gymnasium. The JV also won 38-33.

Tonight’s Events . RJB Girls Basketball will host McCulloch tonight while the boys hit the road to take on the Wabash Apaches. Both junior high events will start at 6:00pm.

NCAA Football . The only game this week was an Armed Services event. Army defeated Navy 17-10 on Saturday. On Saturday, December 29th #2 Clemson will take on #3 Notre Dame in the first semifinal of the CFP in the Goodyear Cotton Bowl at 4:00pm (ESPN). #4 Oklahoma plays #1 Alabama at 8:00pm in the Capital One Orange Bowl to finish off the mathup in the national championship (ESPN).

NCAA Men’s Basketball . The big story this weekend was the fall of #1 Gonzaga on Sunday to the #7 Vols of Tennessee 76-73. Admiral Schofield led all scorers with 30 points in the win. Kansas will most likely top the rankings today as the new top team in the nation.

NHL . Boston took down the Senators 2-1 in overtime on Sunday while New Jersey lost to Anaheim in a shootout 6-5.

Soccer . After Week 16 in the EPL, Liverpool still sits atop the table by one point over Manchester City with one game left today between Everton and Watford.Golf . Jon Rahm won the Hero World Challenge this weekend at Albany. Rahm took home $1 million with a 4 stroke win over Tony Finau.

Featured Image courtesy of Scott Hunt of the Marion Chronicle-Tribune.