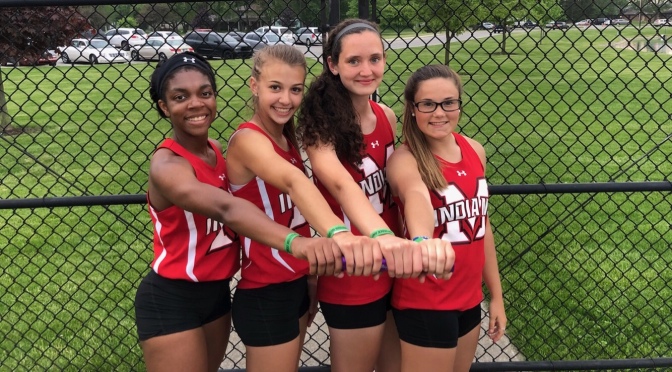 Softball was cancelled last night for both the high school and middle school teams. The Lady Indians will not make up their game against Southwood.

MHS Track & Field . The 2018 IHSAA Girls Track & Field Sectionals were held last night at Indiana Wesleyan. Mississinewa will be sending five girls through seven events to the regionals. Carli Fones won the 100m and 200m. Beth Lucas won the 100h and 300h setting a school record in the 300 with a time of 47.35. Haleigh Skeens won the long jump. Aurora Fisher won the 3200m setting a school record in a time of 12:24.12. Fones, Lucas, and Skeens joined Alayna Webb to win the 4x100m Relay in a school record time of 51.64.

Tonight’s Events . Softball will travel to Huntington with the junior varsity team to take on the Vikings starting at 5:00pm with the JV game to follow. Girls Tennis will face Marion in the IHSAA Sectional tonight at Marion High School. Blackford faces Madison Grant in the other side of that bracket. Baseball plays at Kokomo Taylor at 5:00pm. RJB Softball rounds out the evening with a road game in Hartford City starting at 5:30pm.

NBA . Lebron James scoring 42 points couldn’t stop the Celtics from winning Game Two of the Eastern Conference Finals last night 107-94. Al Horford ignited Boston in the 4th quarter to pull away after a late-game flagrant foul from J.R. Smith. Jaylen Brown led Boston with 23 points. Game Three will be on Saturday in Ohio at 8:30pm on ESPN.

NHL . Tampa Bay won last night 4-2 to take Game Three from the Capitals last night. Washington still leads that series 2-1. Victor Hedman had 3 points with a goal and two assists. The Winnipeg Jets will be in Las Vegas for Game Three tonight at 9:00pm on NBC Sports Network. The Jets and Knights are tied at one game each.

NASCAR . The Cup Series will be at Charlotte Motor Speedway on Saturday for an evening race in the Monster Energy Open. Racing begins at 6:00pm on Fox Sports One.

Indy Car . The Indianapolis 500 is a week and a half away as the flag will drop at noon on Sunday, May 27. Indianapolis Motor Speedway is expecting a tremendous crowd yet again as the points leader Josef Newgarden and last year’s winner Takumo Sato of Andretti Autosport roll in to town.