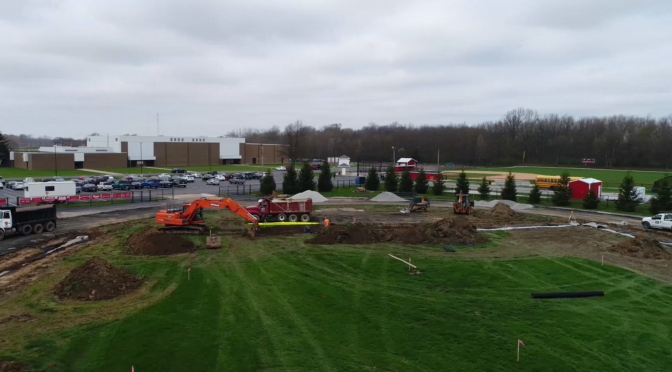 Even though the Boys Baseball game was postponed last night (rescheduled for Wednesday, April 12 at 5:00pm, Watch Live on TheCube), the Lady Indians still battled.

Mississinewa Softball defeated Wabash 13-1 on the road. Foy and Leavitt teamed up for a no-hitter. Bennett and Foy were 3-3 at bat, and McKee, Patton, and Sands were each 2-4. The Lady Indians had 15 hits. The JV Softball team lost to Western 7-9.

The Girls Tennis team defeated Bluffton 4-1 at BHS preparing for the in-county contest on Thursday against #25 Marion. Haleigh Rowley, Heidi Rowley, and Maggie Herring all came away with Singles wins with Katie Powell and Gabby Stephenson at the #2 Doubles position. The JV team also won 5-1.

Progress on the new turf field and track project continues. Below is aerial footage from the brand new TribeTV DroneOne. Scheduled completion of the project is for late July.